I’d been gone for three Saturdays in a row, so I was (almost) glad to be back on the sidewalk.  I had missed my escort friends, and the satisfying sense of doing some good work.

I had not missed this:

It’s hard to see (it was dark) but you may notice that the uterus holding that fetus is apparently free-floating.  I didn’t know they could do that, I thought they had to be inside a woman, but perhaps I was wrong?  After all, we are just hosts for the fetus, right?

Host:  2.  An animal or plant on or in which a parasite or commensal organism lives.

Commensal organism:  1.  A symbiotic relationship between two organisms of different species in which one derives some benefit while the other is unaffected.

Parasite:  1. an organism that lives in or on another organism (its host) and benefits by deriving nutrients at the host’s expense.

Sigh… it really creeps me out.

Then I look across the street and see this:

Yes, that’s the Kentucky Bible College, coming on down to share their gospel music (almost on key today) and their fetal-porn signs.  Here they are, at the end of the morning: 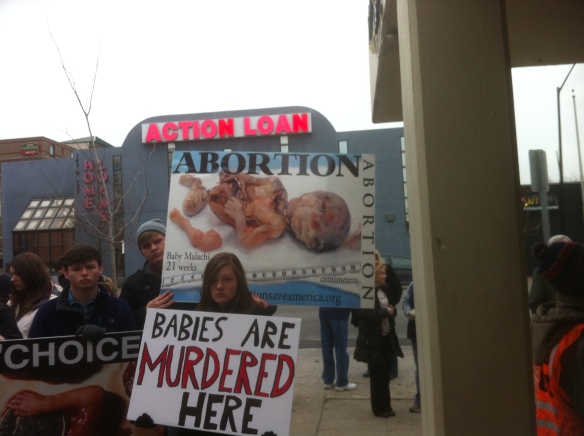 The bible schoolers seem to have decided that if a companion has their arm around a client or helps them to the clinic door it is coercion and the client is being forced to get the abortion. One kept saying “If you’re so alright with what you’re doing why won’t you look at my poster, why are you hiding?” I found that to be rather arrogant, like every eye on the sidewalk should focus on him or it’s a sign of their guilt. No, maybe people just don’t care about you or what you have to say.

The “why are you hiding” guy is REALLY loud.  In fact, the Bible-schoolers dominate the sidewalk by the door, leaving our regulars, like Donna, relatively quiet.  Well, with some exceptions.  For example, Ron (the one who read my mother’s obit to me) is always active. Eeyore says:

Ron gave me and couple of other escorts “a stern talking to about how we’re so negative all the time, why don’t we try to be positive and uplifting.” He had to pause a moment to tell a woman she was a murderer and going to hell.

Then there were some new green-vested-chasers (sounds like a bird, doesn’t it?) but they were quieter than the old hands and not quite as obnoxious.  Some protesters had questions –

“How much do you get paid to do this? How much is your soul worth?”

That one makes me laugh, since you couldn’t pay me to do this, I would only do it for free.  As for my soul – I’m earning points for heaven, showing compassion and care for the clients at the clinic, don’t ya think?  So whether I believe in God and heaven and hell or not, I’m not worried about it.

The question of the day, however, was “What if…?”

What if your mother had aborted you?

Do you have children?  What if you had aborted your children?

If my mother had aborted me, I wouldn’t be here to worry about it!  And the sun would still rise and set, the world would still be spinning on its axis, and that would be ok.

If I had aborted my children – um, they wouldn’t be my children.  My life would be different, the sun would still rise and set, the world would still be spinning on its axis, and that would be ok.

Backwards-walker likes to point out that if my mother had showed up on the sidewalk at the clinic, he would have argued with her to save me just as strenuously as he does everyone else.  That makes me smile.

Um, am I supposed to be grateful that he wouldn’t have wanted my mother to abort me?  Or impressed that he’s so “Christian” he would want even (evil, baby-killing) me to be born?  Oh, but wait – he wouldn’t have known it was “me,” so – nope, that doesn’t even make sense.

Oh, that’s right – it doesn’t have to make sense…

Yep, it was good to be back.  Most of the nonsense rolled off me today.  The antis were glad to see me back (not) but they did notice – I heard Ponytail Guy mutter something about “Satan’s Little Helper is back,” which is about as warm and fuzzy as you can expect a protester to get.

At the end of the day, I noticed this sign, also from AHA (Abolish Human Abortion) 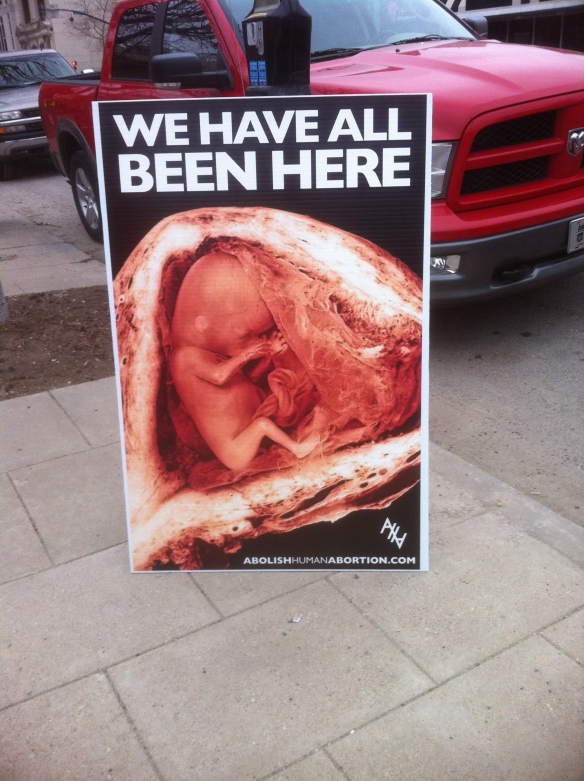 And I thought, yes.  So true.  I could have mentally added some sarcastic comments, but I’ll let you make up your own…

I thought I was going to blog about some other stuff today.  I could have talked about how it seems like things are heating up on the sidewalk.  I could have talked about the Right to Life convention that’s coming in June, or the 40 Days for Life thing that starts next week.   I could have promoted the National Bowl-a-Thon fund-raiser that’s coming up in April, and encouraged you to start a team or make a donation.  But really, I think just talking about my first day back was quite enough…

This past Saturday morning it was raining really hard early in the morning. I find myself hoping most of the antis will stay away because of the weather, but of course they never do. When I arrived at the clinic there were already a couple dozen of them standing with their umbrellas. Most of the regular antis were there and they were joined by groups of people. We ended up with about twice as many protesters as we normally see on Saturdays. The positive part of this is the rain stopped and the umbrellas came down before the first clients arrived.

This is the view from the clinic entrance. 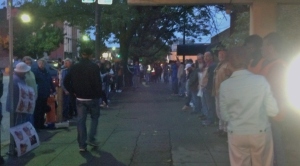 Across the street, a group of about 10-15 Catholics gathered to pray. We assume they were Catholics because they were carrying rosaries and a priest in cassock was part of the group

There was a group from Kentucky Mountain Bible College who came out to display new fetal porn posters and sing. When they first arrived, they lined up on both sides of the sidewalk at the clinic property line to display their posters. Then they moved to the corner of First and Market in front of AWC (the CPC), to sing and pray. They were joined by a prayer leader and alternated between praying and singing. You can see the leader in this video. He is the one in the white jacket. There was a lot of traffic noise so you cannot hear the song, but this time they were singing a version of “Holy, Holy, Holy!”

One escort’s observation about the group’s activities was they could now say they had seen the definition of  “preaching to the choir.”

Even though the Screaming Preacher was there, he left all of the preaching and yelling at the windows to A. A is a regular and is known for his attempts to connect with clients and companions in his approach of ‘I was just like you. I understand you. I care for you.’ This is A. 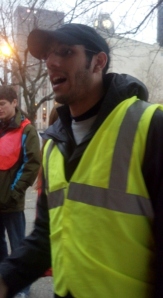 In this video, he is talking to clients and companions waiting by the entrance for the doors to open.

In all of the times I have seen A preaching, I have never seen a client or companion give him those five minutes. Sometimes they will engage with him to correct biblical statements, but not walk away to just talk to him.

A increased his volume after the clients entered the clinic, but his message is always the same. Escorts have heard him so many times, we can recite the story he shares on the sidewalk. ‘I wasted my life until I was 23. Then I read the Bible. My friends said they would find out about Jesus later. One died in a car wreck. He didn’t have time to find out. You never know what is going to happen. You need to find out about Jesus today.’

One of the interesting things about A recently is how he speaks about his wife’s pregnancy. When he first started saying, “My baby is 19 weeks old,” we thought he was talking about a born baby. No, he was talking about his wife’s pregnancy. This morning he let us know his baby was 26 weeks old, adding that the baby recently became legally safe from abortion doctors. An escort observed, “I wonder if he thinks that abortion doctors do drive-by abortions and will randomly attempt an abortion if his wife gets too close to a clinic?”

My question is if he cares for the clients and companions so much, why does he speak words meant to shame and harass them for their decision? I know that is a rhetorical question and won’t be answered, but it doesn’t matter if you scream your words or softly speak them. You are still there to interfere with a legal, medical decision by any way you can.

Cops: 1 regular sheriff, 2 squad cars when we arrived, left around 8am

It was a really quiet morning. We only had a hand full of clients and for the most part our more aggressive protesters were either unusually calm, or not present at all.  Sasquatch Dave had a new friend who was quite aggressive and caused us the most bother. But per usual, the escorts did an awesome job holding space for clients and supporting them through the crowd.

thugs for a loving jesus?!

Angela brought her hubbie out today with her other cronnies. She had a few people speaking in tongues and a few others praying over the clinic. 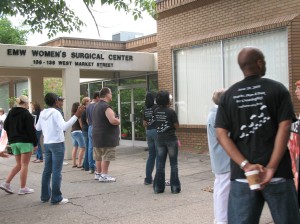 standing by the door. 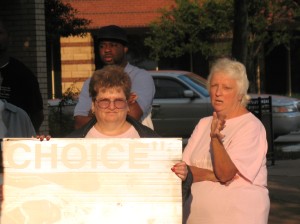 Speaking in tongues is hard work

A Fact Sheet - Are you getting an abortion at EMW?