One week ago today Louisville’s Clinic Escorts announced that we were choosing to suspend our presence on the sidewalk in order to do our part to flatten the curve in Kentucky and the surrounding region. What we did not do was abandon our watch over the clinic. This week, individual volunteers stationed in vehicles have been present each morning to count the number of antis still defying CDC recommendations by showing up at the clinic, interacting directly with one another, and invading clients’ physical space despite this pandemic. Very few antis wear masks and, when they do, don’t always wear them properly even when continuing to approach clients. Since pregnancy lowers an individual’s immune response, and the full effects of COVID-19 on pregnancy are not yet known, this is particularly alarming.

That’s… not doing any good.

We made the ask for antis still arriving at the clinic to take basic precautions. On our final Saturday, one anti informed others as he was leaving that he was on his way to a birthday party. Another was heard bragging that her church was still open – despite the outbreak in Hopkins County that has been tied to a church revival. So it came as little surprise to the volunteers watching this week that our worst fears about the antis’ continued presence and behavior on the sidewalk were confirmed. Below are the numbers and images from each day. 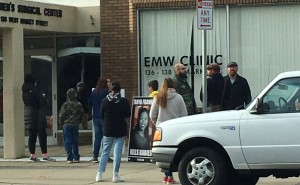 You’ll notice right away that Tuesday and Saturday are the worst days, as has long been the case. There is a regular Catholic presence throughout the week and, while the 40 Days for Life campaign has been called off due to COVID-19, some still remain, funded in part by the Archdiocese of Louisville. Tuesdays are the days that Reformation Church travels the 30 miles from their base in Shelbyville into Louisville to preach on amplifiers, film themselves and clients, and physically block clients as they attempt to enter. The weekend always sees large numbers, but this Saturday was special – Sovereign King Church of southern Indiana declined to postpones one of their semi-regular “rallies” at the clinic. These “rallies” can vary in size, and typically involve multiple people with amplification, multiple people filming, large signs, and frequent instances of physical contact. Last Saturday saw police intervention after one member of this group was seen repeatedly jumping in clients’ paths as they attempted to go around him. There was no distance at all.

The Saturday before Easter is traditionally one of the big three days for protesters at the clinic, and were glad to not see 200 or 300 as has been the case under these circumstances. Still, numbers were high and there was no social distancing – antis were close to one another on the sidewalk and many have plans to hold services tomorrow. Watchers saw innumerable occasions of antis “swarming” patients, obstructing their movement down the sidewalk with large groups of people, getting to close, and speaking directly at their faces, typically with no mask. It was noteworthy that Immanuel Baptist Speak for the Unborn antis had masks – unfortunately, some were removing them in order to speak more clearly to people.

It is our hope that the new order requiring 14 day quarantines for people who choose to participate in mass gatherings will help alleviate this situation. With escorts no longer physically present on the sidewalk, this should be relatively easy for authorities to accomplish, at least with regard to antis who reside in Kentucky. Watching this morning as antis placed clients in danger, blocked them, misdirected and confused them was difficult, and we’re looking forward to the day we can put on our orange vests and get back out there. The sooner everyone joins in to help flatten the curve, the sooner that happens. We’re in this together, Kentucky.

2 thoughts on “Week One Update”