“Normal” can change on the sidewalk quickly. The “Center for Medical Progress” videos intended to incite wrath at Planned Parenthood; goings on in national electoral politics; extremist groups riling up regular antis and bringing new antis out – we know to expect shifts in the dynamic from all of these things.

Recently, we saw some cooling off in the arguments between the longtime, regular weekday Catholic protesters and the newer and more militant Evangelical extremists. It’s not unusual for members of the latter group to yell at Catholics about their “Mary worship” and “idolatry,” and I was worried what large numbers of out of town Evangelical extremists, unused to the dynamic here and with no vested interest in keeping the peace, could mean for escalation between the opposing groups. Fortunately, my concern was unwarranted. Yesterday morning, though, we seemed to be back to it, as a local OSA associate chided Ed Harpring, of the Louisville Archdiocese, on the sidewalk this morning. 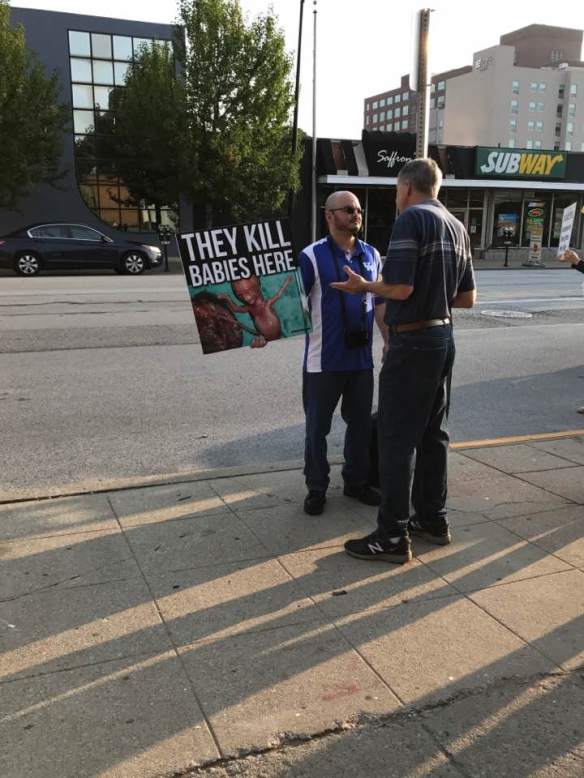 The presence of our local extremists is always an interesting thing. They themselves have always been pretty insistent that what they do is not intended to be “counseling,” but street preaching. Abortion is just one front in a vast culture war that also includes attacking trans folks and Muslims; the clinic provides a handy gathering of various heathens in need of saving. Which sometimes includes the Catholics.

We were also treated to a guy who first showed up during OSA week, screaming at escorts and others in the alley behind the clinic.

We’d not seen this guy before. And when he showed up during OSA week, he didn’t have any gear. Now? Well, it looks like this is what we can expect going forward.

“God HATES you… he hates your guts… you wicked, worthless children of the devil…”

I’m not entirely sure what our “new normal” looks like quite yet. More of the loud and aggressive antis for sure; but then, that’s been the trend for a while now.