When walking with a victim of domestic violence to the police station or walking with a patient to the clinic through years, I have observed remarkable similarities in the behaviors expressed by both abusers and protesters, but I had not reflected upon the actions til now, I realized they do share correlations as oppressors, with their complicated perception of love.

Let me say it clearly, I’m not saying that protesters and abusers are the same-  abusers in abusive relationships can be physically violent toward the victim(beating, strangling, punching), as well as withholding financial and social access (preventing the victim from seeing their family, and not allowing having a personal bank account or keeping their income), as well as holding the children or pets as hostages. Reproductive abuse includes withholding the access to contraceptives, refusing to take them to the pharmacy for emergency contraceptives, marital rape, as well as forcing their partners into keeping unwanted pregnancies, trapping them in the relationship. And on the other side, some clinics, this one included, have experienced physical aggression as in stepping on the patient’s shoes in the back, or leaning heavily backward upon an escort, or blocking the patient, using a graphic fetus poster. At no point, I am not saying that protesters are abusers in their intimate relationships since I do not know their personal lives, and I certainly don’t want to know what they do in their own homes. (Wish they could give us the same consideration!)

Verbal abuse: Yell.  Speak in a menacing tone. Blaming. “Do not talk back to me.” Criticize you on how you look, talk, act. In the home, abusers put down your opinions, or yell at you front of your family or friends enough to embarrass you, mock you on your successes.  “You are ugly, you’re lucky that you have me. No one else would want you.” “You are stupid- you can’t do anything right.”  “Shouldn’t have made me mad to hurt you.” While on the sidewalk, it is common to hear “you’re a murderer,”  using a loudspeaker loud enough to deafen you even with a bluff of thick glass between you and the anti. “Your hot pants got you in this situation.” “We pray that God breaks you down and humble you so that you may know and love him.”  “You’re prime candidates for euthanasia,” spoken to an escort in an wheelchair and to an elderly escort using a cane.   “This is what love looks like” was said by the protester harassing the escort.

Gas-lighting: This is a tactic that intentionally causes one to question “did I just experience that?” while the abuser or protester claims that it did not happen, or switch the role to themselves, painting themselves as the victim.  The victim would look for her keys which she very well knew she had put on the counter, and then the abuser would return the keys to the counter later and tell the victim “you’re feeble-minded, you forget everything.” The victim then questions her sanity.  After saying “I’ll kill you,” later to say “I was kidding, I never said that, you made that up.” On the sidewalk, it’s common for protesters to make statements which they then do not recall later on, or rewritten to make themselves look as victims. “I’m the victim, not you!” “I did not push you, you pushed me” – despite the fact that they were in the back, pushing against you.  “Rape is always wrong, it would be wrong for me to rape you, and abortion is always wrong. If I raped you, it would be wrong, and getting an abortion is wrong.” “She certainly does not look brutally raped!” was said to a patient’s mother trying to explain why her daughter was getting an abortion.  Trivializing is popular, in dismissing their own behavior, while telling the patient or escort “you’re too sensitive, getting upset over a little thing?” It is also common for them to take videos and then edit the videos to paint themselves as the victim or martyr, omitting their own oppressive actions toward the patients and escorts, so when folks see the edited videos, they question the validity of the experiences that the patients and escorts – exactly as intended. That is a reason why we escorts hold up our cameras to tape illegal and violent activities of protesters,  on live Facebook, to prove otherwise.

Threats: Threats are very common in both situations. That includes intimidation and threatening gestures.  “If you leave me, I’ll find you and kill you.” “No one will believe you, they will think you crazy.” “You have no job experience, no one will hire you. How can you live without me?”  The abuser does this to control the victim to stay in the abusive relationship, and people keep wondering why they will not leave.  Threats can be overt (“I’ll take you to court and take the children from you”), and covert, in which the victim is hyper-sensitized then to certain gestures and words – even a raised eyebrow can be a threat to the individual involved, that may fly over other people not familiar with this kind of tactic.  On the sidewalk, the threats are often cloaked with ‘good intentions’- hence covert threats, “They’re going to take you into the basement and cut your baby up.  If there was a fire, you’d never make it out alive.” “Be a  man, don’t let her kill your baby.” “You should die for helping them kill their babies.” Provoking the companions in goal of having them attack the ‘helpless protester” to get police involved, to prevent the patient from going ahead with the procedure.   And of course, this one. Loudly in the Louisville Metro Council chambers. 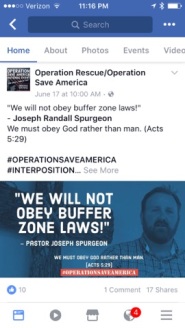 Depersonalizing: Both share the belief that the domestic violence victim and patient seeking the procedure is not their own person- they are property, belonging to the controller/public, not allowed to decide  or thinking for themselves. Even more, they see you as an object that should be controlled within marriage or relationship, your reproductive capability belonging to them, not you. They shame you for having sex outside of marriage, and then shame you for having a sexual identity – “Slut”, “Whore”, “mother”, “mommy”, “freak”, “sinner.” They take the personal identity from the individual involved in the situation, be it in a relationship or going to the clinic.

In the predictable outcome, the escorts and medical staff become desensitized to the mistreatment, like the victim in the abusive relationship.  The insults start creeping in, imperceptibly undermining the victim’s confidence and the escorts’ resilience. Insults disguised as jokes or prayers. Eventually, by months of being belittled and disparaged, the abuse is then normalized. It is concerning that when a day on the sidewalk come with “minimal” verbal abuse and threats, we count it as a “good day”, not realizing until later that it was still traumatizing for the patient who is like a victim newly exposed to domestic violence in the budding relationship, without conditioning as we escorts and medical staff have been.  The victim in the abusive relationship had already lost their self-confidence and trust in themselves was gone, whittled to nothing by the hands of the abuser.  Easier to do that with being isolated and alone, which is not so for us escorts and medical staff. We have each other to check in, to hold space, and to reaffirm our support for each other.  I admire solo escorts at certain clinics immensely; they each one would have to deal with the hatred cloaked as “love” and “good intentions,” while reassessing their self assertion without that support.   The tactics by the abuser and protester aim to cause harm to the other person who dares to take control of their own body, whittling here and there to the point that most of us have become numb.   Only when talking to other escorts who just returned to the sidewalk, commenting on escalating aggression, do we realize the danger.

All  this acts are done in name of “love” –  how they interpret love is very different from what the majority of us see love as.  They see love as harming the person for “the good of the person/soul.” They blanket their oppression, the violence, the aggression as “love”.

In domestic violence, the abusers misconstrue their actions as “love,” as control and power over the partner/victim.  They feel threatened by any sign of independence, either physical or emotional, expressed by their partner, such as considering going to college or getting a job, or picking an item of clothing without the abuser’s feedback. Hence the behavior is to pull in the victim back in control, while reminding them that the behavior is their fault, not the abuser’s. Shifting the blame of their own oppressive actions upon the victim in the abusive relationship: “You made me hurt you, I love you and I have to do this to you.”

In protesting against abortion, protesters distort their actions as “love,” as control and power over the patient, medical staff and escorts.  They feel threatened by the patient practicing the right to decide for themselves, so they cloak their harassing by claiming they are doing it in God’s name. The protesters are avoiding taking responsibility for their own behavior by claiming that the escorts supporting the patients are making them being aggressive. And they threaten the medical staff providing the abortions, by trying to find where they live, where they go to church or the grocery, with potential of harm. They even bragged how they stalked providers, with pride.  The “You’re making me hurt you, God says I must love you, and I am doing this in name of His love” mentality.

So you can see, how the abusers and protesters share some common ground in their twisted perception of love, how they shape love in their own image, to justify emotional, psychological and physical maltreatment toward the victim in the intimate relationship and the patients and people involved in reproductive access. Excusing their own abusive behavior in the name of “love.”

Truth?  Not in love, not in God’s name, but in truth, in the name of power, fear and control.

1 thought on “There is no law against love.”