Please also read Part One – the antis, and Part Three – the clinic staff.

Before I get into where the patients would go in the event that controlling power hungry oppressors get their wish, I want to take a moment to make sure our readers truly realize what it already takes for a Kentuckian to get an abortion. In April, Kentucky Health Justice Network outlined the barriers that many folks face before they even get to the clinic in this post:

The True Cost of Abortion in Kentucky

Effective Tuesday April 11, 2017, due to additional overhead from the new ultrasound law, increased staff needs and legal costs, EMW is raising their prices by $50 across the board.  That means the least expensive procedure (medication abortion, using the pill) will cost $700 per person. Someone at 14 weeks will have to pay $1150. Twenty weeks: $2050.

Those procedures costs are some of the highest in the nation, but there are costs far beyond that. Here is a breakdown of what it really costs:

If they do not live in Jefferson County, they will have to travel up to 250 miles round trip. That requires access to a reliable vehicle, and usually a companion to do the driving post-op. (So, also factor in gas money. Yes, maybe they could fly or ride a greyhound but would they take cabs to and from the airport, bus station, hotel, clinic, etc?)

The law requires they receive informed consent counseling 24 hours before the procedure. Some people take two trips to the clinic for this.  Some do it via web app but that requires access to Internet or smart phone data, plus a safe environment for a video conference call, which can be a big challenge for people in rural areas.

If they are a parent, childcare arrangement must be made, and sometimes paid for.

They may need to stay in Louisville overnight, which could cost $70-100 per night, plus cost of meals while away from home.

All this could require taking 3-5 days off work, which could mean losing a substantial chunk of income, or risking job loss.

All this to access safe legal care, that insurance could cover if it wasn’t for politicians trying to control our bodies and our lives.

THANKS, KHJN for that informative breakdown and also for running the Support Fund, which provides direct and practical support for Kentuckians facing barriers to abortion access, even when they have to travel out of state for care, which brings us back to our title query: Where Would They Go?

Kentucky is bordered by 7 states.

Indiana is home to four abortion clinics, and VP Mike Pence.  Many believe that if KY loses its clinic, IN won’t be too far behind.  I disagree, but have learned in the last year or so to not be too comfy or confident because those in power do intend to strip every right to bodily autonomy away from us, and they are wealthy, resourceful, and punishing- at best. Abortions in Indiana are only available prior to 14 weeks of pregnancy.

Ohio has about 3.5 clinics right now.  One clinic in Cincinnati had to modify their services because of harsh restrictions that have no medical justification. For now, that facility can only offer medication abortion (with the pill) prior to 7 weeks of pregnancy, plus pre-op requirements for patients who live close to there, but then would have to travel to another location in Dayton where a termination can be performed.  For many folks living in Central or Northern KY, these OH clinics would be the closest options.

Illinois has some of the least restrictive laws, and several clinics. It is also the Bluegrass State’s neighbor that is least convenient for most KYians to get to. It’s likely that most people traveling to IL for care would be doing so to access abortions later in pregnancy.  Those surgeries can cost as much as $3600 and are often medically necessary due to a variety of complications and health risk.

Missouri is also home to just one clinic- the Planned Parenthood in St. Louis. Anyone accessing abortion care in Missouri will be subjected to a SEVENTY-TWO HOUR WAIT, you know, because grown people cannot be trusted to know what they need when they make their doctors appointments. Seems like there would be similar regulations on things like erectile dysfunction meds…oh, wait.. nevermind, LOL. Due to that wait, I cannot imagine KYians choosing MO for an abortion unless they live very close to that state, and have supportive family or friends they can stay with. That medically unnecessarily waiting period is a huge barrier.

Virginia has several clinics, but they are also heavily regulated. Abortions performed beyond the first trimester must be done in a hospital, possibly with the approval of a second physician. There is a 24 hour waiting period, plus mandatory ultrasounds, and parental consent requirements for minors, among lots of other medically unnecessary laws.  Again, KYians needing care would likely only travel to VA if it were convenient for them personally, which is unlikely for the bulk of KY residents.

West Virginia is in a similar boat as KY, with one remaining clinic open in Charleston, which is neighbored by a (you guessed it) crisis pregnancy center- which can be especially confusing for folks coming from out of town. The drive to Charleston and back would be over 500 miles for most KYians.

Tennessee has a handful of abortion clinic, which are of course, outnumbered by deceptive crisis pregnancy centers, including a mobile unit.  Nashville or Bristol has the locations that would be most convenient for Kentuckians being forced to travel for care. Anyone seeking an abortion in TN must endure a 48 waiting period, so we can imagine that a KYian going to TN for care would need a place to stay, or have to make two trips.

All those options are only possibilities for people who have access to resources including social and emotional support, travel capabilities, the freedom and funds to take time off work, and many other hurdles including the biggest one: money.  Most states have one or more abortion fund, and some clinics have financial assistance programs, but for many, the hurdles created by stigma, crisis pregnancy centers, and legislation make it a miracle for folks to even be able to reach a clinic, or a fund in order to get factual information about the care available to them, and what it takes to get there.

We already know that google searches about how to induce an abortion at home are way up. We know that people with mouths to feed and bills to pay will take desperate and dangerous steps to end a pregnancy.  We know that stickers like this pictured below are appearing in public places because groups like Women Help Women want to make sure people have reliable, modern information, rather than questionable “guides” to using cottonroot bark, tansy, pennyroyal, and more to poison oneself in an effort to induce a miscarriage.

Unfortunately, I think the chilling truth that we have to face is that while people with resources will be able to travel to clinics mentioned above, those with fewer privileges in fact have fewer choices, and will likely end up repeating the drastic actions of people in poor, rural, or marginalized communities before Roe vs Wade. As we have already seen, these are also the communities most vulnerable to prosecution for the crime of taking care of their bodies.  This is why it’s vital to preserve access: so people can have compassionate and safe care in a medical setting. If only we can stop clinics from being regulated out of existence. 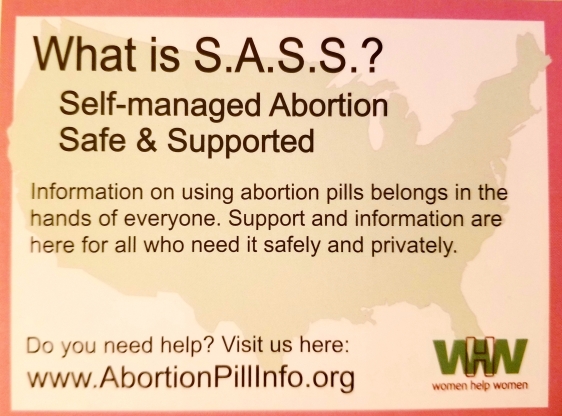 Read Where Would They Go? Part 1 – The Antis

3 thoughts on “Where would they go? Part Two – The Patients”