I don’t usually escort on weekdays.  When I do, it seems quiet and calm compared to Saturdays.   I have time to chat, and time for random observations.  For example, you may have seen this on billboards:

BEFORE I WAS EVEN BORN

The sign is leaning against the fire hydrant, one of the handy devices the city has placed on the sidewalk in front of the clinic to showcase the antis signs.  (The sign on the other side of the hydrant says, “THE KILLING PLACE,” a helpful marker for people having trouble finding the clinic.)

But the “I could smile” sign confuses me.  Because I’m pretty sure that after babies are born, they don’t really smile.  I mean, they make that little Mona Lisa smile sometimes and we say, “Oh!  Look!  She’s smiling!”  And then somebody else says, “No, I think that’s gas.  They say that’s just gas – I don’t think they can smile yet.”

When a baby gets to be about 4 months old, they start smiling like they really mean it, and we’re all thrilled and say, “Oh, look!  Look at that smile!!  Oh!!” and no one disagrees, and our hearts all melt a little bit.

So I don’t understand this pre-born smiling thing.  Is it that little Mona Lisa smile?  Because that one really doesn’t mean anything.  Or is it the big “I’m so happy to see you” smile?  If that’s the one, then I want to know what happens to it once they’re actually born.  Why do they not smile again for months?  Do they miss the womb?  Feel disappointed about their life?   Very strange.

Interestingly, the sign was made by a company based here in Louisville – a non-profit started by people at a local church.  Now I’m wondering if the billboards are sold nationally, or if other cities have their own sign makers.  And are all the billboards the same? Surely we’re not the only place to have billboards proclaiming:

I COULD DREAM BEFORE I WAS BORN

7 months BEFORE I was born I had FINGERPRINTS!

The billboards are real bright, like the picture I posted, mostly blue and yellow, with splashes of red.  Do youall have the same ones where you live?  And do they come from the same company?

These are the kinds of things I ponder on a weekday morning at the clinic.  Here’s the other thing that caught my eye. 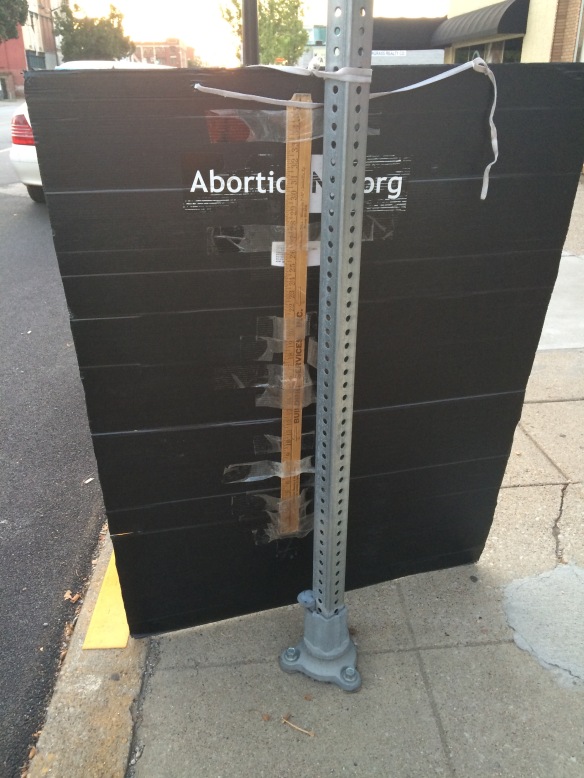 Finally, I bring you this video from a Saturday. A couple of clients and their companions arrived early and were treated to Story Time by Dominic. I guess it’s better than listening to him yell, “Murder!  Murder in the first degree!!”  So this kinder, gentler Dominic starts off saying that he’s Japanese American.

Donna (comes up behind him):    Honey, you are already a mom.

Yep, darn Supreme Court, if they hadn’t made abortion legal, no one would have one.

You might have thought I was going to write about Planned Parenthood and the continuing efforts to defund them, or how these ludicrous efforts are inciting more push back from people who might not have paid attention otherwise, or how some states are passing more restrictive laws while other states are having their restrictive laws overturned, or any of the other substantive challenges facing us.  But no.  The sidewalk is a form of the Theater of the Absurd, so:

“There is no action or plot. Very little happens because nothing meaningful can happen.”

The action on the sidewalk doesn’t meet all the criteria for Theater of the Absurd, all the time, but it comes close.  More about that another time…