There’s a property line on the sidewalk in front of EMW Women’s Surgical Center. Traditionally, the protesters don’t cross it.  But lately, the antis have enjoyed mocking this boundary.  They get as close to the line as possible, put their toes across it, and one morning… 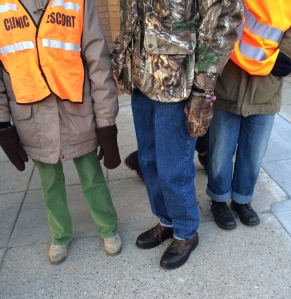 …the anti in the snazzy camoflauge wear maneuvered himself in-between the two escorts right on the line.   With his sign. 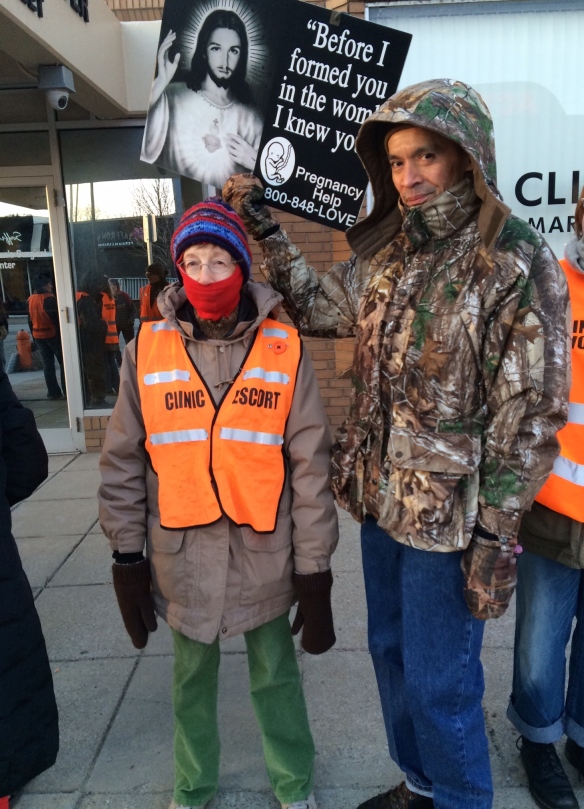 Yes, his arm is over the property line.  Yes, he’s almost touching the escort, with his arm, with his sign, and with his body.  And yes, he’s smirking.   He thinks he’s “won” something here.  Well, and he likes the attention of having his picture taken.  Yes, I’m sorry I gave him that pleasure.

But the picture illustrates my point.  Like a morality play, the action in front of the clinic often seems like an allegorical acting-out of the theoretical battle between “good” and “evil.”  A symbolic representation of the conflict between belief systems, it’s played out in dramatic postures, with repetitive scripts, and proscribed roles.

Protesters are convinced they’re the good guys.  They care about the pre-born, “the most helpless and vulnerable among us.”    Protesters want to stop women from having abortions, for their own good, because they really care about them.  They know that escorts don’t care, that we’re evil people who want to kill babies.  And hurt puppies.

Escorts know that we’re the good guys.  We love babies and puppies, and we care about the already-born.   Escorts want all options family planning and a full range of reproductive health care.  Escorts believe in equality and self-determination, while protesters are evil people who want to oppress, shame, and subjugate women.

Well, no.  No, of course that’s not completely fact-based.  But when I’m on the sidewalk, it’s easy to see it that way.   I fiercely oppose some of the values and beliefs that the protesters represent.   They push us toward a world without birth control or access to abortion, a culture where a women’s worth is inextricably tied to giving birth, and where an embryo is worth more than an already-born woman’s life.   I believe those ideas are dangerous and damaging to us all.

But on the corner of 2nd and Market at 7 a.m., the antis are there mostly for symbolic reasons.   Think about this.  According to the Guttmacher Institute, more than 99% of women who have experienced sexual intercourse have used at least one form of birth control.  Some of those people are on the sidewalk protesting.   The data indicates that one in three women has an abortion in her lifetime – and some of those women are on the sidewalk, holding signs, yelling, chasing, and shaming others.

I used to think this was the most amazingly pure hypocrisy I’d ever seen.  But maybe it’s just the difference between their “real life” and the virtues they’re touting ~ um, representing ~ on the sidewalk.  Do you see what I mean?  I’m not saying they don’t believe what they’re saying – I think they do, in theory.  But in real life ~ well, people need birth control and sometimes they need abortions.  That doesn’t have anything to do with showing up to protest at the clinic.

Ok, yes, that is hypocrisy.  By definition, it is.  But before I start to throw stones at them (figuratively) consider this.   Few of us live up to our own standards all the time.   I believe that climate change is a real problem and that we need to use our resources more wisely.  And I still drive my car everywhere and get my groceries in plastic bags.  I know, I know that’s bad, and yes, I do feel guilty.  But I could still go to some protest against a big corporate polluter and feel virtuous about it.

Trying to escort in a way that adheres to my values is hard too, and I don’t always do it as well as I want to.  When I started escorting, six years ago, I imagined I would be able to stay calm and centered all the time.  Wrong.  300 mornings of watching the protesters preach, scold, shame, harass and harangue the clients has challenged me in ways I didn’t expect.

Figuring out how to do what we do on the sidewalk, without being terrible hypocrites ourselves, is the most interesting part of escorting, for me,  The challenge is different for every escort, and different clinics approach it differently, and it’s all fascinating.  I’ll talk about that more in my next post.

In the meantime, I want to make a personal pledge:  I pledge to donate $5 to fund abortion access every time a protester reminds me that I publicly said on here that I “don’t always live up to my own standards.”   Another $5 if they mention my environmentally-unfriendly flaws.    That’s right – $5 every time they mention either one.   I’m creating win-wins every chance I get…

The Saturdays before Easter, before Mother’s Day, and before Father’s Day are big days for protesters.  You can help raise funds for escorts and for abortion access by pledging a small amount per picketer, or by pledging a lump sum for the horde of antis who come out to harass and intimidate women seeking legal medical care on those days. We count the protesters each day, but on Pledge-a-Picketer days, it gives us great glee to know that each number ticked off means more money raised to support the very thing they are there to obstruct. We’ll be posting updates after each big day with the total number of antis, as well as any new sidewalk stories that emerge. This form will be included in our posts from now through Father’s Day, but don’t wait til the last minute, pledge now: Pledge-a-Picketer Pledge Form

This is the clinic the Saturday before Mother’s Day in 2009. 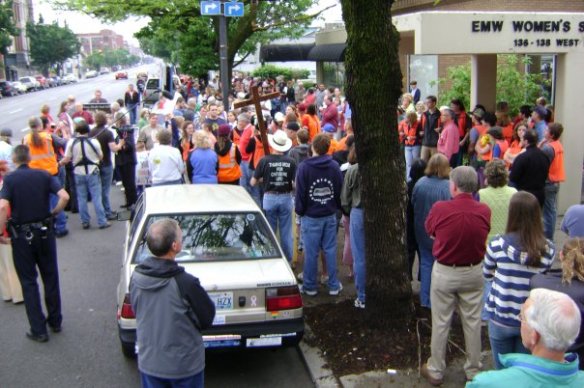