There are times that watching the antis is entertainment. This Saturday morning a few clinic escorts were standing at the entrance of the clinic. Most of the clients had already entered the clinic and we were waiting for any late arrivals. That’s when anti watching and listening can be fun for escorts. The rest of the time we ignore them.

There was a new anti out. She was standing alone beside the “No Parking” sign. The city has posted two signs that read, “No Parking 6AM-10AM Saturday Passenger Pick-Up and Drop-Off.” The zone blocks two parking meters used during the weekdays. 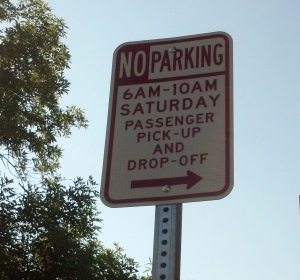 Since the signs have been up they have been a real annoyance to the antis. They try to line the sidewalk between the signs to block anyone who might be dropped off. We post escorts there when we can, but we aren’t always successful and the clients and companions using the drop-off zone have to wind their way through the antis.

Unsuccessful attempts by antis to park on Saturdays in the spaces blocked off are always met with several escorts pointing to the signs; on one occasion we had to threaten to call city towing. During a weekday recently the anti T  told an escort they could not park there and said he was going to call the police to have the escort’s car towed. When he was told it was legal on weekdays and was asked a few times to read the sign, he finally  read the sign and said, “You might be right.” I’m sure it was only coincidence that he left immediately afterwards.

Even knowing the history of the signs, we were surprised to see the new anti in a pose that looked like she was trying to push it over. She pushed tentatively with one hand and then put both hands on the pole, braced her feet and pushed hard. The pole rocked a little, but still stood firm. While she still had both hands on the pole, NB came and pushed with both hands one time too. The pole stayed firmly planted. This whole process took less than a minute before they stood up nonchalantly and assumed a position in front of the pole. Soon D joined them and they just stood there quietly talking amongst themselves as if nothing had happened. 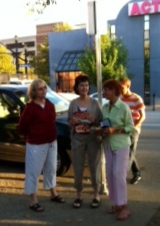 I started laughing. I couldn’t help myself.

Now to be fair, both of those antis could have been stretching the kinks out of their muscles like athletes will do. Standing for so long on the sidewalk can be tiring for leg muscles when your only activity is shouting. They may both have felt the need to stretch at the same time, in the same place, using the same support. The pole was handy there on the sidewalk, so why not?

There was no way they were going to move the sign, so I will go with the more charitable explanation.

It is a good thing the sign and pole weren’t damaged. It would still be a No Parking zone on Saturdays. The city would fine them for destruction of city property. Definitely a major inconvenience for just a muscle stretch, but stranger things have happened on the sidewalk in front of the clinic.