One of our escorts developed this brilliant Bingo to be played while we are at the clinic. You can print out the pictures and play along wherever your clinic is, but with practice you can visualize the Bingo board in your mind and place your mental tokens while practicing your 1,000-yard stare. Have fun and don’t forget to yell “Bingo”! It will totally confuse the antis.

(We have written out the Bingo Legend cards at the end of the article for easier reading and hyperlinks.) 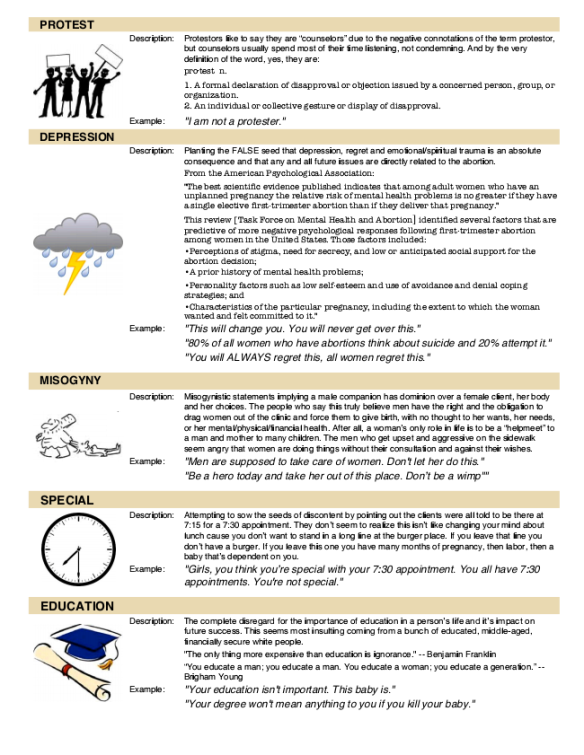 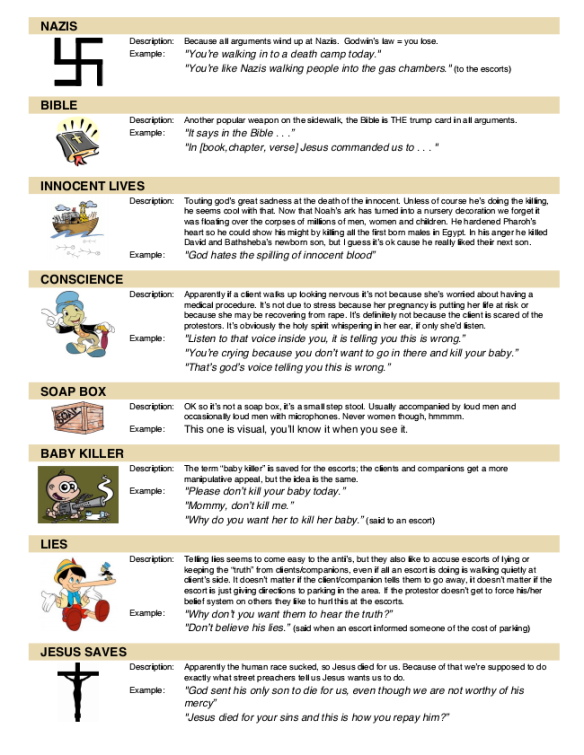 Description: The use of god as a weapon is prevalent on the sidewalk. The protesters never seem to think that the people escorting or going to the clinic might worship a different god or no god at all. They can’t fathom that someone might worship the same god but interpret the writings in different ways, with different outcomes. No, their god is THE god and they know what angers him, they are right and you are wrong.

Description: Mention of payment as proof that abortion is evil and the doctors are without compassion or ethics. Makes you wonder how upset they get about plastic surgeons.

Example: “Girls, they only care about your money, they don’t care about you.” “Did you know this clinic has made four million dollars?”

Description: Use of the ever popular “are you chicken?” taunt. Most people grow out of this phase at the same time they outgrow recess and drinking juice boxes, which is probably why it’s so jarring when used by an adult.

Description: Protestors like to try to scare people entering the clinic. One popular way is to imply the building is a tinder box waiting to go up in flames, apparently with no fire suppression equipment or escape route. If they are that concerned about the clients well being maybe they should be urging their congressmen to reverse the TRAP laws that prevent the clinic from renovating or moving.

Example: “Did you know that they take you into the basement to perform the abortion? There are no windows or exits down there. If there is a fire there is no way out. You will die down there.”

Description: The protestors like to point out that the women can change their minds even after they’ve entered the clinic. They seem to believe no one has ever realized this. The escorts on the sidewalk just call that CHOICE and assume women will make the one that’s right for them.

Example: “The door didn’t lock behind you. You can leave at any time.” “Every one of you can walk right out that door.”

Description: Talk goes from love to punishment & damnation quickly on the sidewalk. Protestors know exactly what incurs god’s wrath and will happily tell you what’s coming for you in the afterlife.

Example: “God will punish you for this.” “If you die tonight are you ready to face your creator knowing what you’ve done here today?”

Description: Protestors like to say they are “counselors” due to the negative connotations of the term protestor, but counselors usually spend most of their time listening, not condemning. And by the very definition of the word, yes, they are:

1. A formal declaration of disapproval or objection issued by a concerned person, group, or organization.

2. An individual or collective gesture or display of disapproval.

Example: “I am not a protester.”

Description: Planting the FALSE seed that depression, regret and emotional/spiritual trauma is an absolute consequence and that any and all future issues are directly related to the abortion. From the American Psychological Association:

“The best scientific evidence published indicates that among adult women who have an unplanned pregnancy the relative risk of mental health problems is no greater if they have a single elective first-trimester abortion than if they deliver that pregnancy.”

This review [Task Force on Mental Health and Abortion] identified several factors that are predictive of more negative psychological responses following first-trimester abortion among women in the United States. Those factors included:

•Perceptions of stigma, need for secrecy, and low or anticipated social support for the abortion decision;

•A prior history of mental health problems;

•Personality factors such as low self-esteem and use of avoidance and denial coping strategies; and

•Characteristics of the particular pregnancy, including the extent to which the woman wanted and felt committed to it.

Example: “This will change you. You will never get over this.” “80% of all women who have abortions think about suicide and 20% attempt it.” “You will ALWAYS regret this; all women regret this.”

Description: Misogynistic statements implying a male companion has dominion over a female client, her body and her choices. The people who say this truly believe men have the right and the obligation to drag women out of the clinic and force them to give birth, with no thought to her wants, her needs, or her mental/physical/financial health. After all, a woman’s only role in life is to be a “helpmeet” to a man and mother to many children. The men who get upset and aggressive on the sidewalk seem angry that women are doing things without their consultation and against their wishes.

Example: “Men are supposed to take care of women. Don’t let her do this.” “Be a hero today and take her out of this place. Don’t be a wimp””

Description: Attempting to sow the seeds of discontent by pointing out the clients were all told to be there at 7:15 for a 7:30 appointment. They don’t seem to realize this isn’t like changing your mind about lunch cause you don’t want to stand in a long line at the burger place. If you leave that line you don’t have a burger. If you leave this one you have many months of pregnancy, then labor, then a baby that’s dependent on you.

Description: The complete disregard for the importance of education in a person’s life and it’s impact on future success. This seems most insulting coming from a bunch of educated, middle-aged, financially secure white people.

“The only thing more expensive than education is ignorance.” — Benjamin Franklin

Example: “Your education isn’t important. This baby is.” “Your degree won’t mean anything to you if you kill your baby.”

Description: Because all arguments wind up at Nazis. Godwin’s law = you lose.

Example: “You’re walking in to a death camp today.” “You’re like Nazis walking people into the gas chambers.” (to the escorts)

Description: Another popular weapon on the sidewalk, the Bible is THE trump card in all arguments.

Description: Touting god’s great sadness at the death of the innocent. Unless of course he’s doing the killing, he seems cool with that. Now that Noah’s ark has turned into a nursery decoration we forget it was floating over the corpses of millions of men, women and children. He hardened Pharaoh’s heart so he could show his might by killing all the first-born males in Egypt. In his anger he killed David and Bathsheba’s newborn son, but I guess it’s ok because he really liked their next son.

Description: Apparently if a client walks up looking nervous it’s not because she’s worried about having a medical procedure. It’s not due to stress because her pregnancy is putting her life at risk or because she may be recovering from rape. It’s definitely not because the client is scared of the protestors. It’s obviously the holy spirit whispering in her ear, if only she’d listen.

Example: This one is visual, you’ll know it when you see it.

Description: The term “baby killer” is saved for the escorts; the clients and companions get a more manipulative appeal, but the idea is the same.

Example: “Please don’t kill your baby today.” “Mommy, don’t kill me.” “Why do you want her to kill her baby.” (said to an escort)

Description: Telling lies seems to come easy to the antis, but they also like to accuse escorts of lying or keeping the “truth” from clients/companions, even if all an escort is doing is walking quietly at client’s side. It doesn’t matter if the client/companion tells them to go away, it doesn’t matter if the escort is just giving directions to parking in the area. If the protestor doesn’t get to force his/her belief system on others they like to hurl this at the escorts.

Example: “Why don’t you want them to hear the truth?” “Don’t believe his lies.” (said when an escort informed someone of the cost of parking)

Description: Apparently the human race sucked, so Jesus died for us. Because of that we’re supposed to do exactly what street preachers tell us Jesus wants us to do.

Example: “God sent his only son to die for us, even though we are not worthy of his mercy” “Jesus died for your sins and this is how you repay him?”

Description: Protestors seem very concerned that clients have not met the OB/GYN who will be performing the abortion. Not sure if they feel the same way about an ER doctor, or a heart or brain surgeon. A lot fewer surgeries would be completed if everyone had to have a “getting to know you” dinner with the surgical staff beforehand.

Example: “Girls, you don’t even know the abortionist.” “Why don’t you go to a real doctor.”

Description: Spreading incorrect, out-dated data on the sidewalk is a biggie (see depression above). A popular one is about the link between breast cancer and abortion

From The American Cancer Society:

✴Breast cancer risk is increased for a short time after a full-term pregnancy (that is, a pregnancy that results in the birth of a living child).

✴Induced abortion is not linked to an increase in breast cancer risk.

✴Spontaneous abortion is not linked to an increase in breast cancer risk.

The level of scientific evidence for these findings was considered to be “well established” (the highest level).

Description: Escorts won’t get with the company line and call protestors counselors or “life escorts” so the next best thing is to call your enemy names.

Example: “Don’t listen to the deathscorts, they don’t care about you.” “The deathscorts won’t be here when you come out.”

Description: Protestors use the lure of free things to get clients into the CPC. They imply it will save them money and time, but the “few minutes” stretches into sixty, the counseling turns into preaching. They even have “hospital grade” pregnancy tests, a nicer stick to pee on one presumes?

Example: “Why don’t you come next door for a free ultrasound? It will only take a minute.” “If you change your mind we’ll refund the cost of your procedure.”

Description: Some things defy all categories.

Example: “Why do you want to kill my daughter.” (said to an escort while the protestor was shoving a two year old towards the escort)

“The pregnancy is ectopic.”

“My daughter’s baby doesn’t have a brain.”

“Are you sure? Have you seen a real doctor? Would you talk to a friend of mine, she had something like that and the baby’s fine.”

8 thoughts on “Sidewalk Bingo ~ by Anonymous”