It is things like this from the Wisconsin legislature:

“Under penalties of up to $10,000 in fines for failure to do so, a physician performing the ultrasound must verbally describe the number of “unborn children” present in the image, the location of the fetus or fetuses within the woman’s uterus, and provide a medical description of the dimensions and visible characteristics of the fetus. They must also provide a means for the woman to visualize the heartbeat of the fetus, if one is detectable by the type of ultrasound chosen by the woman.”

that lead to things like this from the American College of Obstetricians and Gynecologists:

The group’s Executive Board has issued an official statement opposing all laws that “unduly interfere with patient-physician relationships” and compromise patients’ health care for political gain.

“Given the relentless legislative assault on the patient-physician relationship that we’ve seen in the past few years — and unfortunately continue to see — we were compelled to issue a formal Statement of Policy,” the group’s president, Dr. Jeanne A. Conry, explained in a press release. “A disproportionate number of these types of laws are aimed at women’s reproductive rights and the physicians that provide women’s health care services.”

So the more of these extreme {ridiculous} laws we see, the more likely people are to push back.  We can even hope that eventually rulings like this one from the Colorado Supreme Court:

The Supreme Court will not intervene in a Colorado dispute over barring anti-abortion protestors from displaying graphic images in places where they may be seen by and upset children.

will lead to less of this: 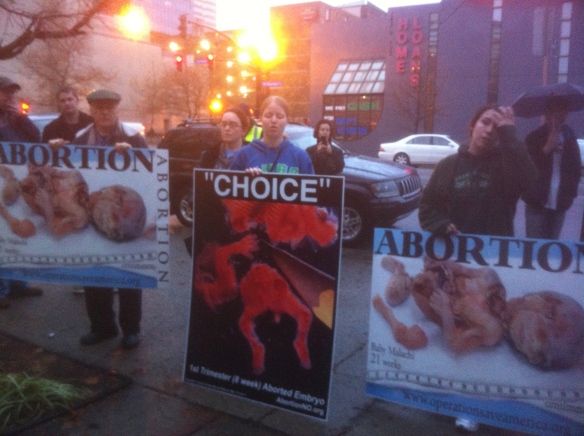 at least during marathon season when lots of families with children are all coming down to watch the race.

It’s consoling to remember that the more extreme things get, the sooner the pendulum will swing back.

4 thoughts on “The Pendulum Swings..”