That’s how many protesters there were.  What does that look like?

Yes, that’s a stroller ~ lots of families packed up the babies and came on down.  We’re heading up from 1st Street – the clinic is at the awning off in the distance there.  As we keep walking:

Meanwhile, on the other side of the street, near the $3 parking lot is this: 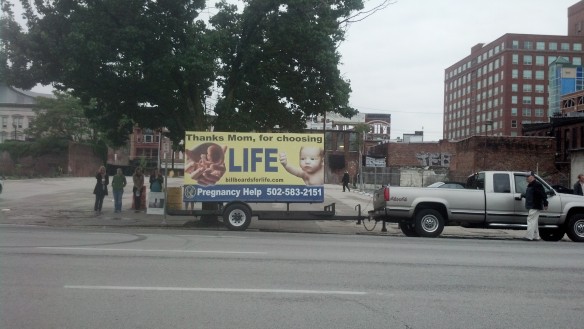 They used to park this billboard right in front of the clinic, but we make a real effort these days to get there early enough to take up those parking spaces.  One year, we succeeded in leaving him nowhere to park.  That was lovely.

If you’re coming around the corner from the 2nd street side, it looks like this: 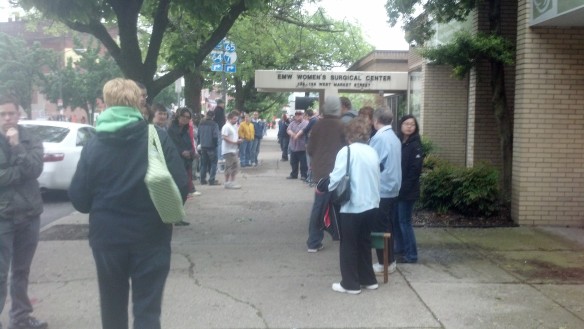 Which is not quite as daunting as walking up through the whole gauntlet from 1st Street.  But regardless of which direction you come from, at the door, you’re greeted with this: 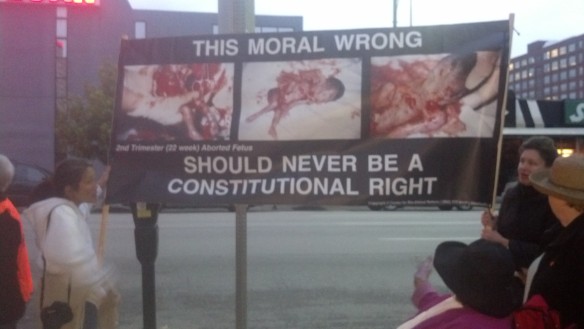 Yes, the “preacher”in this video chides the escorts for “how they treat the women who come there… patting them on the back…”   But I heard another protester say “the women are dumped out at the curb and the escorts drag them into the clinic,” ~ an interesting interpretation of events.

Watching the video, you can tell a client has come around the corner.  The woman in red springs into action.  “You don’t have to kill your baby, someone can help you, PEOPLE WANT YOUR CHILD!” she screams.

Something about that creeps me out, it is as if the client has ceased to exist and is purely an incubator.    I might have thought that was the most chilling thing I heard, if I hadn’t heard a mother talking to her son on their way back to their car.

The woman was clearly pregnant.  The little boy was about five, walking beside and slightly in front of her, holding her hand.  I don’t know what he said, but she replied in that extra sweet voice we sometimes use with our children when we know someone’s listening.  She said, “I know!  It is scary!  I don’t know how these people can want to kill little babies.”

All I can do is shake my head.  And hope that when he’s old enough to understand, someone can explain to him why his mother would want to take him around people that she believes want to kill little babies.  Cause I sure don’t get it.