At the clinic Saturday, we had the bus with the folks from the Bible College show up.  This is the group whose women always wear skirts, and they bring guitars and sing.  They did a lovely rendition of Amazing Grace.

At least I think it was the same group. They used to stand further down the sidewalk, on the other side of the pray-ers, but this week they were front and center.  They were all mixed in with the people who yell at the clients as they get to the doors.  Here’s what it looked like: 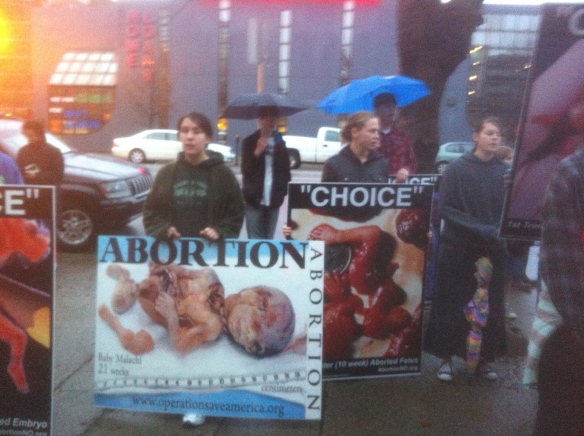 Yes there really are two of the blue ABORTION signs and two of the CHOICE signs.

They’re standing in front of the clinic windows in both of those pictures.

If you were coming down the sidewalk from 2nd Street, here’s what you saw on Saturday.  Remember, you’re headed for the concrete “awning” thing that says EMW. 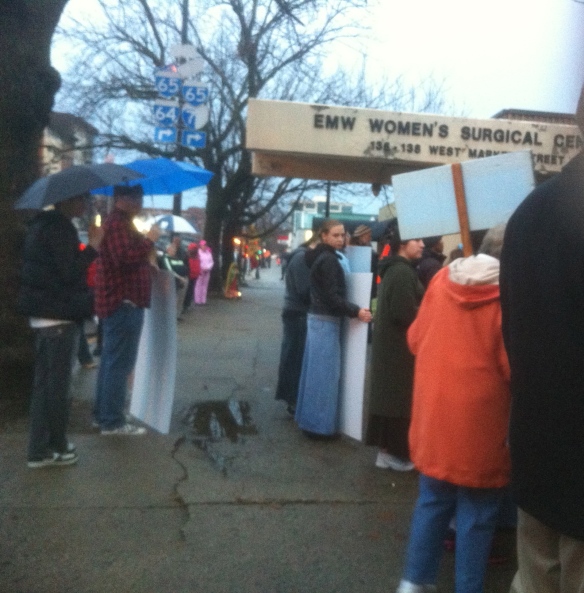 I think it’s a daunting prospect, which of course, is exactly what they want it to be.  They would like to turn the clock back 40 years.

January 22, 2013 is the 40th Anniversary of Roe v Wade.  Forty years of legal, safe abortions.  This invitation comes from our allies at Kentucky Religious Coalition for Reproductive Choice:

“KRCRC (is making plans for a January 20 event in Louisville, “The Roe Monologues,” to mark those 40 years (four decades, two generations!) since the Roe v Wade ruling, and we need your help.

We’re looking for your story. But also for your mother’s, your daughter’s, your sister’s, aunt’s, girlfriend’s, roommate’s, friend’s story. Fairly brief; 2 to 5 minutes, and starting with the year. (e.g. “It was 1983, and I was trying to finish up my nursing degree, when I found out I was pregnant.” “In 2008, my wife and I had been trying for several years to have a baby. Now she had finally gotten pregnant, but when we got the results of the amnio, …” “1957. I was living in Missouri, and abortion was illegal. When my roommate learned she was pregnant, …” etc)

On Jan. 20 at our event, we will love it if you will present it yourself. But if it’s bad timing, bad location, or you’d just rather not get up to present it yourself, we will be happy to have someone read it for you. Also, you can use your own name or a made-up name, your choice.

We need these stories! – and people need to hear them. Will you help us? Will you spread the word that we’re looking for these stories?

Please email info@krcrc.org if you think you’d like to participate, either in person or by providing a story for someone else to read.”

By stepping out and talking about our experience we reduce the stigma and shame that surrounds abortion.  By sharing our stories, we support each other and continue building a world where reproductive justice is a reality.