I’m still thinking about how polarized we are, on our opposite sides of the abortion fence.   It’s like we keep digging ourselves deeper into our own trenches.

On one hand, we have the “no exceptions, no way, no how” side.  They apparently believe  that the already-born mother should die to save a developing fetus, apparently even if the fetus is going to die with her.  I am righteously indignant at the idea that someone else is going to tell me ~ or my daughter ~ that we should literally die rather than have an abortion.

Lots of women ~ and men ~ would be willing to die for their child.  I probably would, as far as that goes.  And if the mother is willing to risk her life, that’s her choice for sure.  But it’s not usually mandated by someone else.

I was ranting about this at home the other night, and my partner pointed out that the “Women and Children first” rule, if the ship’s going down, is actually pretty close to the same thing ~ a mandate to die to save others.  I tried to argue that it wasn’t the same ~  that presumably it’s just women and children first, not instead of the men.

But anti’s would argue the same thing, they’d say the mother might not die the doctors might be wrong, a miracle could happen, and so on.  So I finally had to concede that it probably is pretty close to the same thing ~ mandated heroism.  But at least in that case the people you’re saving are already born.

And of course it wasn’t an actual law saying men had to go down with the ship, it was just the Captain who was really expected to die, right?  The other guys were just supposed to be heroes, there wasn’t any legal enforcement of the rule.

What’s interesting to me is that I didn’t want to give up my stance that this horrible position toward abortion was mandating death for some women and that this was more awful than just about anything ~ which reflects how polarizing this whole thing is.  So it took some effort to budge me an inch, for me to even say, “Ok, yeah, that is similar in a way ~ and so maybe that was wrong too!”  {Just for the record, he wasn’t arguing against abortion, just pointing out the similarity of society mandating who should die when.}

In retrospect, the challenge to my thinking was helpful.

Anyhow, in the same way, when I read what  Rep. Roscoe Bartlett, a Republican Representative in Maryland said, it challenged me.  He said: “Most abortions, most abortions are for what purpose? The just don’t want to have a baby! The second reason for abortion is you’d like a boy and it’s a girl, or vice versa.”

So I did a Facebook appeal for the facts of the matter, and because I have awesome Facebook friends, I got a link to this study from 2004.  The sex of the child is not even a reason given in that study, much less one of the main reasons.

Another friend pointed out that women usually don’t even know the baby’s sex until 18-20 weeks into the pregnancy, while only about 2% of abortions happen after the 20th week.

So I’m feeling reassured that, once again, this congressman doesn’t know what he’s talking about, when I see this: 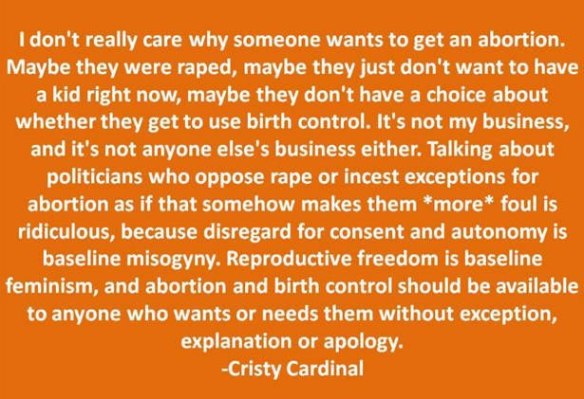 And I totally agree with that.  The other end of the no-abortion spectrum, right?

Except ~ I’m going to whisper this part, ok?  If women were really doing it all the time because they didn’t like the baby’s sex, just because they wanted a boy, or wanted a girl and didn’t get one ~ um…. I’d have issues with that.

I still wouldn’t think abortion should be against the law.  I would still ttotally support the right to choose.  But I think that would bother me.

Which is exactly what Congressman Whatever wants me to think.  If I even half-way believe him, it makes it an effective argument.

On the other hand, I think that tinge of doubt on my part maybe moves me out of the deepest of polarized trenches?   Maybe the goal is not to dig myself as firmly as possible into one spot and stay there regardless.  Maybe I need to be open to my own shades of thinking.

Or maybe I’m over-thinking the whole thing.  Feel free to leave angry comments ~ or kind, gentle comments would be better ~ explaining why I’m wrong.  But the argument in my head is about how to move away from the polarity of positions, to recognize that it doesn’t have to be total extremes from either end.

And I have to go escort this morning, so I’m out the door now.  Don’t forget to join us for our

Breakfast and good times for all.  You don’t have to attend the training to be an escort, but it helps.  Email us for information on where or if you have questions.

10 thoughts on “The Extremes of Choice”