Recently there has been a lot of attention paid to a tactic a group of anti-choice protesters outside of EMW Women’s Surgical Center in Louisville KY is using to deceive the clients trying to access abortion services. Louisville’s Clinic escorts (volunteers provide emotional and tactical support to clients entering the clinic) wear orange vests that say ‘Clinic Escort’ identifying themselves to clients. In the last month the anti-choice protesters have begun wearing remarkably similar vests, the only difference is the wording on the vest: ‘clinic escort’ vs. ‘life escort’. In this post I want to explore the intersection of Rape Culture and anti-choice activism highlighting the places were reproductive and sexual health meet the reality of our cultural norms.

Rape culture is defined as the cultural normalization of sexual violence. We see this in the social context of blaming the rape survivor for the rape; they were asking for it because they attended a party or had a few beers. Our court system routinely blames survivors of domestic violence for staying in abusive situations without providing viable options for those seeking refuge. Melissa McEwan has an awesome Rape Culture 101 post with lots of examples of what rape culture looks like including this gem of a paragraph.

“Rape culture is 1 in 6 women being sexually assaulted in their lifetimes. Rape culture is not even talking about the reality that many women are sexually assaulted multiple times in their lives. Rape culture is the way in which the constant threat of sexual assault affects women’s daily movements. Rape culture is telling girls and women to be careful about what you wear, how you wear it, how you carry yourself, where you walk, when you walk there, with whom you walk, whom you trust, what you do, where you do it, with whom you do it, what you drink, how much you drink, whether you make eye contact, if you’re alone, if you’re with a stranger, if you’re in a group, if you’re in a group of strangers, if it’s dark, if the area is unfamiliar, if you’re carrying something, how you carry it, what kind of shoes you’re wearing in case you have to run, what kind of purse you carry, what jewelry you wear, what time it is, what street it is, what environment it is, how many people you sleep with, what kind of people you sleep with, who your friends are, to whom you give your number, who’s around when the delivery guy comes, to get an apartment where you can see who’s at the door before they can see you, to check before you open the door to the delivery guy, to own a dog or a dog-sound-making machine, to get a roommate, to take self-defense, to always be alert always pay attention always watch your back always be aware of your surroundings and never let your guard down for a moment lest you be sexually assaulted and if you are and didn’t follow all the rules it’s your fault.”

An example of rape culture being utilized as social control against women and LGBT people can be seen in the 2009 horrifying gang rape and murder of Eudy Simelane, an out lesbian footballer in Kwa Thema, a suburb of Johannesburg South Africa. 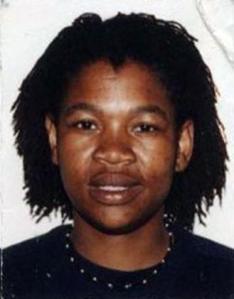 The motive for the attack was “corrective” in nature, that is, culturally sanctioned sexual violence in order to enforce heteronormativity. The Guardian reported “What we’re seeing is a spike in the numbers of women coming to us having been raped and who have been told throughout the attack that being a lesbian was to blame for what was happening to them,” said Vanessa Ludwig, the chief executive at Triangle. The goal of the rapists is social conformity to the broader misogynistic paradigm, or in other words the heteronormative, enforced gender binary with women’s bodies and supporters of women’s bodies the target of socially condoned sexual violence and intimidation.

Now, let’s turn to the sidewalk in front of EMW Women’s Surgical Center in Louisville KY. Five days a week, protesters chase women and their families from their cars to the door of the clinic, yelling at them, calling them murders and whores, in general harassing them. The anti-choice protesters view themselves as peaceful, information bearers. They genuinely believe they have been ordained/ instructed by God to minister to these women. And while they certainly have the right to speak their mind and oppose abortion, we move squarely into the realm of rape culture when there is no place between the interactions of anti-choice protesters and the women to consent to the interaction. We move even further down the continuum of disempowerment and social control when women clearly DO NOT CONSENT to the interaction. Routinely clients will say something along the lines of “Please Leave ME ALONE” and the anti-choicers continue to aggressively impede their progress, thus crossing the line between free speech and assault.

white male privilege says "yes, you can and are"

The first week the anti-choice protesters showed up wearing their very deceptive vests one of the regular chasers told a group of escorts they (the anti-choicers) were simply trying to “level the playing field”. Which I feel is one of the most disgusting displays of social privilege I have witnessed in my 10 years of escorting in Louisville. What I think this young woman was trying to get across is that they feel entitled to the time and attention of the women entering the abortion clinic for reproductive health care services, and that if it is necessary to be physically imposing to do so, obfuscation and misinformation are appropriate tools to such an end. This entitlement is at the core of rape culture. The attitude that the bodies of women and queers are fair game as a battle field for social conformity is exactly the place where reproductive justice and rape culture intersect. Eudy Simelane and Dr. Tiller’s bodies were destroyed in attempts to isolate and stigmatize the ‘other’.

Tim Tomeny and another bully stand as close to the door as they legally can. from these posts they jump out at clients, shove or trip escorts and sometimes snap pictures. nice guys, real nice.

Well, we are all the ‘other’. There is no ‘other’. Rape Culture hurts us all. Rape is a tool of war. Gender equity is destroyed by rape. And the only way to combat these evils is to fight for the autonomy and empowerment of all people.

15 thoughts on “Reproductive Justice is the Antidote to Rape Culture”