(I realize that this is a kind of long picture post – but if you only look at one thing, watch the first 30 seconds or so of the video at the end! It’s amazing – I was sung to/at!)

This was my first weekday at clinic. There were 6 escorts, if I remember correctly, and about 10-15 protesters. My numbers might be off, but that’s my estimate.

This morning was pretty interesting. The dynamic is very different with fewer clients, fewer escorts, and fewer protesters. The really loud and pushy protesters (soap box preacher, Angela, Donna, and gray haired rude dude) seem to enjoy the extra attention and engaging escorts as much as possible.

Here are the finest photos I managed to get today: 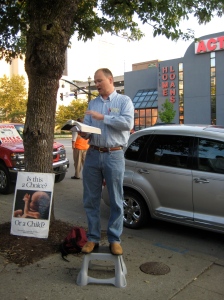 This guy does great ad-libs ("Do the math, people!") and makes the most artificial, practiced looking hand/arm motions

... but when Angela showed up, he stepped down for a minute. Note the sorrow (or annoyance?) on his face. Poor guy. 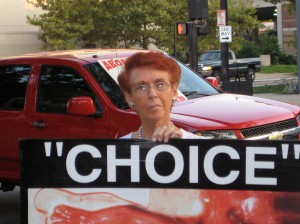 Donna was there. As usual. An advocate for choice! I wanted to photoshop this to say "Asshole" with an arrow towards her face. But that would be childish. Then again, I had to tell her "No pushing!" a BUNCH today, so maybe childish is ok.

This guy was very entertaining today, and was adament that he was neutral. He told us lots of interesting stories, showed off his baby (Matilda, aka Mattie), and even told the Soap Box dude to shut up. He is an interesting guy, for sure.

This bossy lady stayed pretty quiet today, but did give us very stern looks.

This seems to be one of Donna's buddies. She said "What do you want me to do, smile?" and I said "Sure, smile, make a face, whatever." After I took her picture a few times, she said "That was pleasant," and walked away. What? 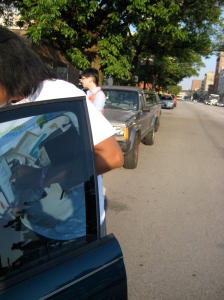 Angela held open this car door as a client's support person/friend was getting in her car. I told her that she should think about not touching other people's cars. It was weird and I felt uncomfortable, because the friend was not adament about Angela backing off. I stayed a few feet away in case she needed/wanted some back up.

I like this picture. Gotta get creative with time to kill, right?

And here is the crowning glory of my morning! I get a shout out about 30 seconds in.